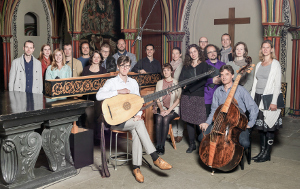 Since its debut with Continuo Anthems by Purcell, the ensemble has dedicated itself to the music of Monteverdi, Gesualdo, Heinrich Schütz, Johann Hermann Schein, George Frideric Handel and J.S. Bach, but also to newly published works, for example by Biagio Marini.

The ensemble BERNVOCAL is under the patronage of Federal Councillor Simonetta Sommaruga.