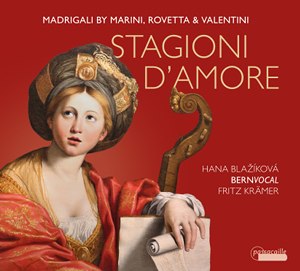 “More gleaming, the anthology of Venetian music of the Seicento, mixing works by Marini, Rovetta and Valentini around the theme of the four seasons, is superbly defended by the soprano Hana Blažíková (impeccable diction and agile vocalisation), supported with fervour and intelligence by a solid vocal and instrumental ensemble (BERNVOCAL), under the energetic and attentive direction of Fritz Krämer. (Stagioni d’amore, Passacaille, *****).”

“One only has to hear Hana Blažíková exhale the torments of her Lagrime d’Erminia to be immediately won over by this suave and agile soprano. The ensuing recital did not betray this promise. The rest of the vocal team is nothing short of delightful, both in terms of technique and empathy with the texts. The madrigals for mixed voices are particularly well matched in terms of timbre, impetus and collective dynamics. The ensemble BERNVOCAL, under the lively and inspired direction of Fritz Krämer, is impeccable. This enchanting and constantly touching disc is hardly worth depriving of an Absolute Joker. Duly noted!”

“Through a precise and sensitive dramaturgy, the soprano Hana Blažíková and Fritz Krämer, conductor of the Swiss ensemble BERNVOCAL, have woven a link between the seasons and the cycle of passionate love …
Hana Blažíková is compelling, confident and distraught at the same time, her very free and tension-free voice fully dedicated to the poem.
… the warlike trumpets alternating with amorous jubilation are superbly represented by a homogeneous team of singers well versed in the art of madrigal singing …
The effect is magnificently exploited by the ensemble, which also shines with its instrumental excellence.”